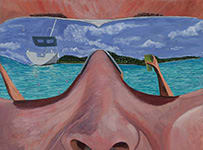 I'm a third-generation west coast Floridian that grew up playing and ultimately worked along the entire Gulf coast of the United States. I come from a family with a long history of commercial and sports fishing and spent most of my youth, into adulthood, on or around the water working, fishing and playing in various capacities aboard my family's boats and those of our friends and acquaintances.

In later years it would be my own boats. I also branched out into other things as I grew to love sailing. My life was unconventional to say the least. and  basically one big adventure that took me to many countries and lots of islands over the course of the past 50 plus years.

I never thought about drawing or painting until I was 12 years into a 35 year Federal Sentence for a Drug Smuggling Conspiracy Conviction, when I saw a guy sketch an image that caught my attention. I attempted to draw my coffee mug, but it was so bad that my friends couldn't identify it. I read a book titled, "Drawing on the Right Hand side of the brain" and that was the beginning of a very long learning experience. And it was a great mental escape from the harsh realities of incarceration for a free spirited individual like myself. But it has allowed me to express myself on canvas over the years.

And here I am years later with my art all across the United States and several other countries. I have been told that I express myself with colors. But I'll leave that for you to decide. However, I am a self-taught artist that has won recognition in many circles, and some awards in several small art shows that I have participated in over the years. I was invited into my first private art show when my 15th painting caught the eye of the wife of a Gallery Owner from Manhatten who was leaving a Pilates Studio in Miami where I had the painting hanging. Since then, I have done a number of commissioned pieces, as well as have one of my paintings chosen in 2020 to be on the cover of a newly released novel that is selling internationally, as well as here in the United States, Titled, "The Last Florida Boy". In 2020, I was invited to place 7 of my Islandscapes onto a Multimillion Dollar Yacht, (Mansion Yachts) at Art Basel Miami, which was a real honor. If you see something you like and want to find out more about it, please feel free to contact me and I'll gladly get back in touch with you. There is an interesting story behind most all my paintings, and I have at least three times as many paintings waiting to be released.

The Art Storefronts Organization, which means you can shop with confidence, and know that I stand behind the quality and value of my products.

The presence of this badge signifies that this business has officially registered with the Art Storefronts Organization and has an established track record of selling art.

It also means that buyers can trust that they are buying from a legitimate business. Art sellers that conduct fraudulent activity or that receive numerous complaints from buyers will have this badge revoked. If you would like to file a complaint about this seller, please do so here.

This website provides a secure checkout with SSL encryption.

Your cart is currently empty.

This is only visible to you because you are logged in and are authorized to manage this website. This message is not visible to other website visitors.

The above preview shows how to use the live preview on this website. The image displayed is just an example, and is not available for sale.

This means you can use the camera on your phone or tablet and superimpose any piece of art onto a wall inside of your home or business.

To use this feature, Just look for the "Live Preview AR" button when viewing any piece of art on this website!

Below, select which favorite lists you would like to save this product into.

Enter your email below and we'll email you a 20% OFF Coupon right now!

This offer is valid for NEW CUSTOMERS only!